In my last blog post, I looked back on my first 5 years as a freelance web developer. As you may recall from the piece, I gained a lot from that transition, both on a professional level as well as in terms of my financial situation. And despite the fact that I never regretted my decision, it occurred to me that I had no idea how I was doing compared to my peers on a financial level. Was I maybe charging too much, or too little? Could I make more as an employee?

Being the naturally curious person that I am, I decided to set up an experiment and reached out to the PHP community in Belgium. To my surprise, I came back with a lot more participants than I had thought and a clear indication that there was a lot of interest in this particular subject. And so it seems no more than fair that I share my findings and conclusions with all of you. I was very happy to have this information and it gave me some new insights into my professional environment, and I hope it can do the same for you.

Before we dive into the numbers though, there are a couple of things I should mention to give you a clear picture of how things went down. First of all, the subject of earnings is immensely complex (not to mention incredibly sensitive) and I never had any intention of get to bottom of this subject. I just wanted to get a general idea of state of things and compare myself to other developers in my field. Secondly, I didn’t have the time to approach the subject scientifically. As a result of this, I simplified things quite a bit in the process.

Given the parameters set above, I decided to set up an online survey using Typeform. This service is very familiar to developers and has the added benefit to make processing the data more efficient. The questionnaire consisted of 7 short questions designed to get a general idea of the earnings of the participants. The questions were the following:

My only mistake (and regret) with regards to thsese questions is that I asked to provide the net revenue instead of gross revenue ("netto" instead of "bruto"). Gross revenue would have given me a much clearer picture since there are quite a bit of factors that are taken into account when calculating the net revenue. Nevertheless I still feel that it doesn’t render my results irrelevant since there is still a lot to be learned from them. On a lesser note, I also could have (and maybe should have) added a question about gender, though I feel that only would have mattered if there had been 100 or more submissions.

The survey was passed along mainly through the PHP Belgium Slack group and via email to other PHP developers in my personal network. In total, there were 30 people that participated. You can download the results using this link. 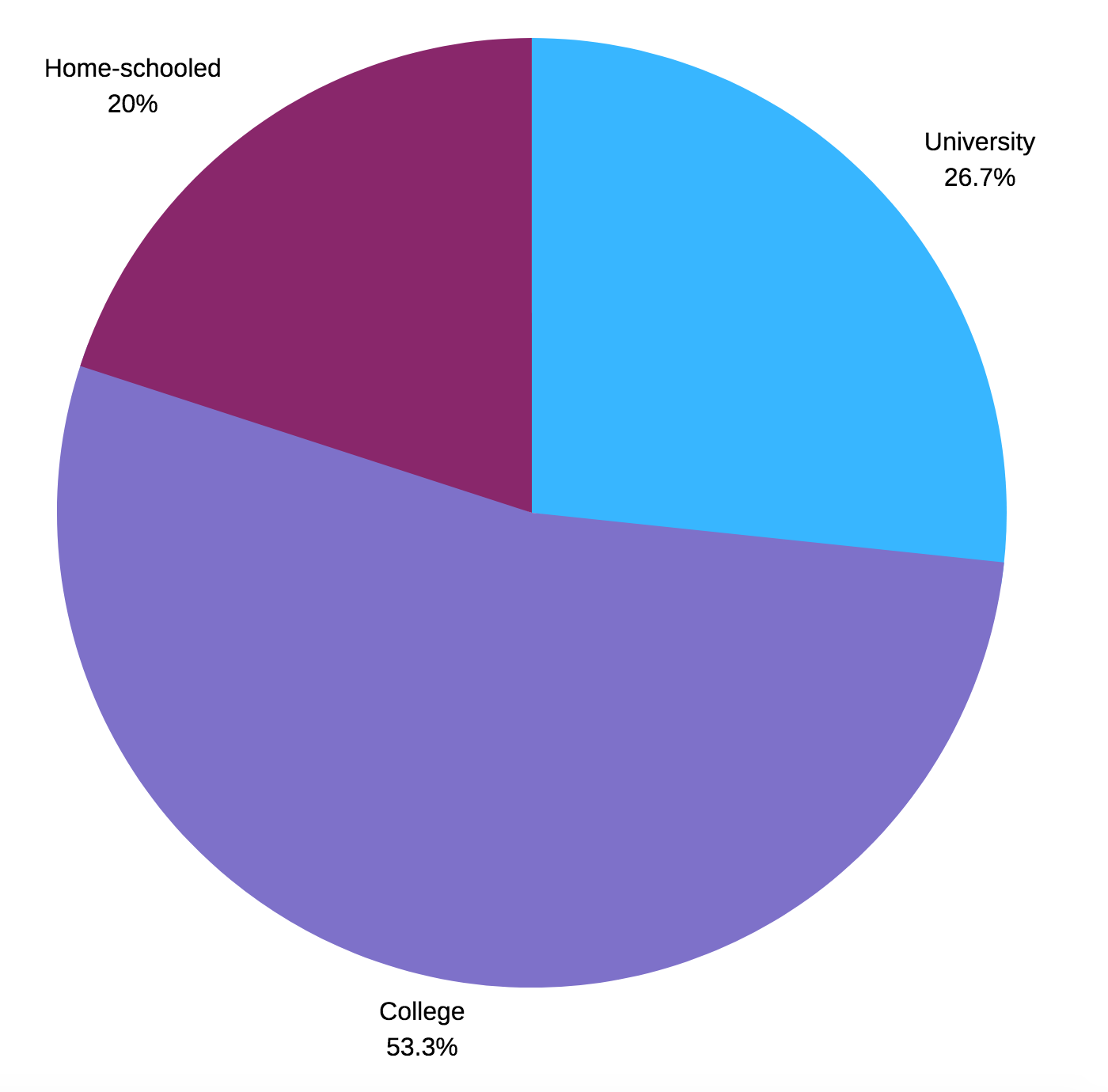 For me, this last number was somewhat a surprise, since it was quite high in my opinion. Nevertheless it’s worth noting that the level of education often has nothing to do with the actual skill of the developer. I have personally witnessed both extremely talented developers without any kind of degree and university graduates who failed to master the basic concepts of class inheritance.

The survey also showed that most participants are employees instead of being self-employed. A third option, PHP developer as a second job (“bijberoep”) was not selected by any of the participants. 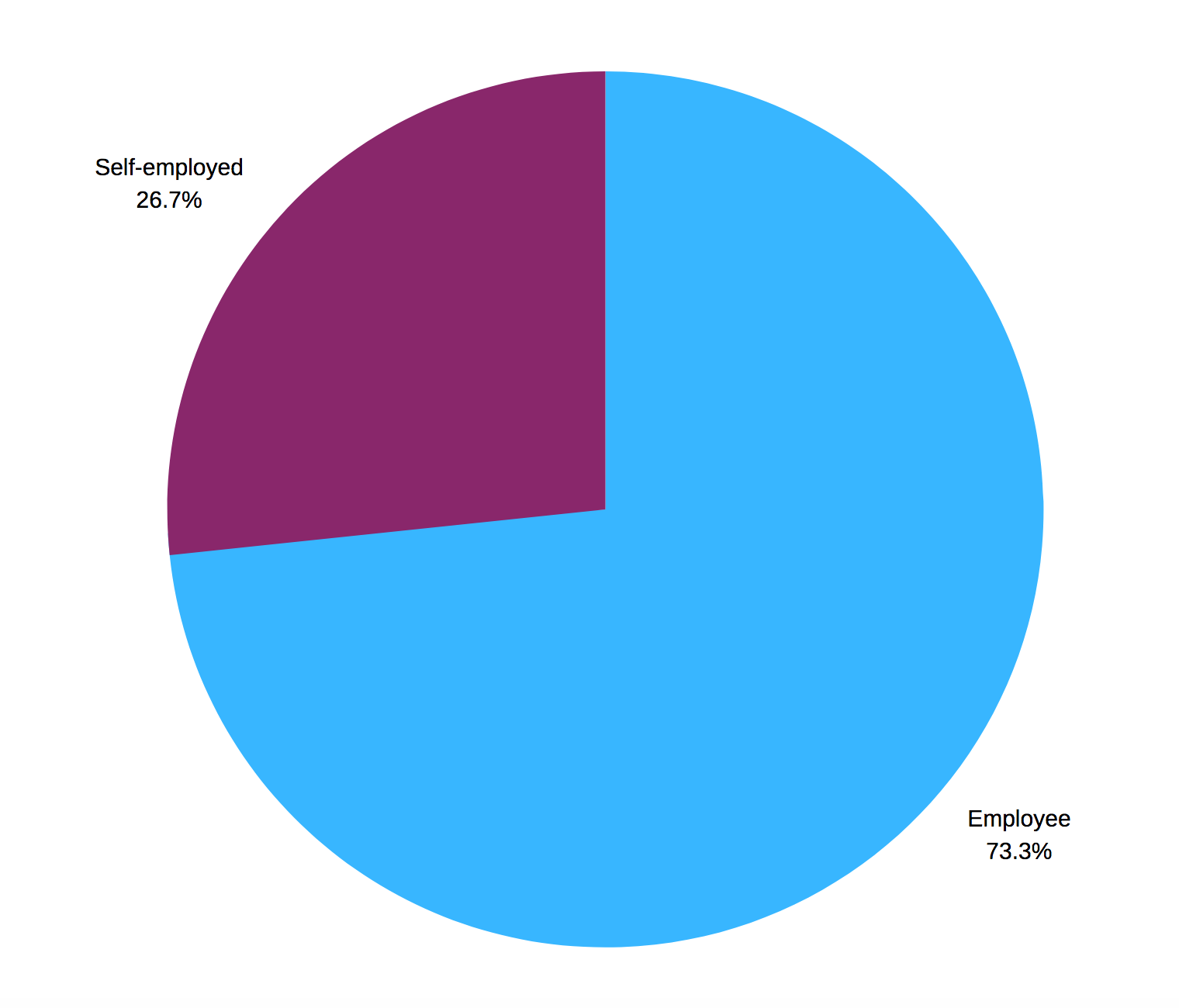 These numbers are not at all surprising as far as I’m concerned since there are still plenty of risks involved in becoming a freelancer. I won’t go into detail since that would be a bit outside of the scope of this article. In case you are wondering about my journey, I would refer you to my previous post. 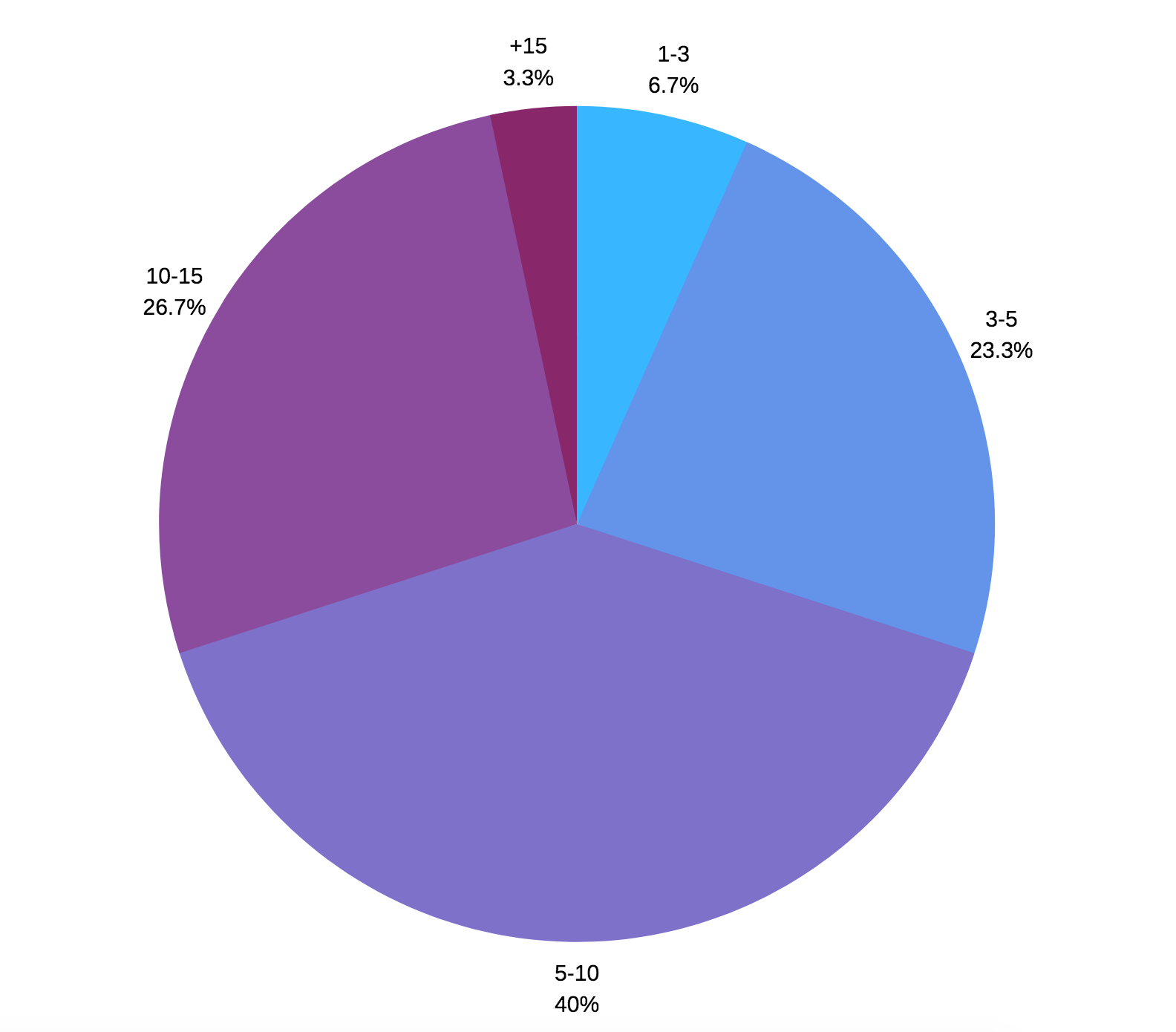 When comparing revenue between employees, we can once again see a clear bell curve. The overwhelming majority of participants indicated to have a monthly net income somewhere between € 2.000 and € 2.400. 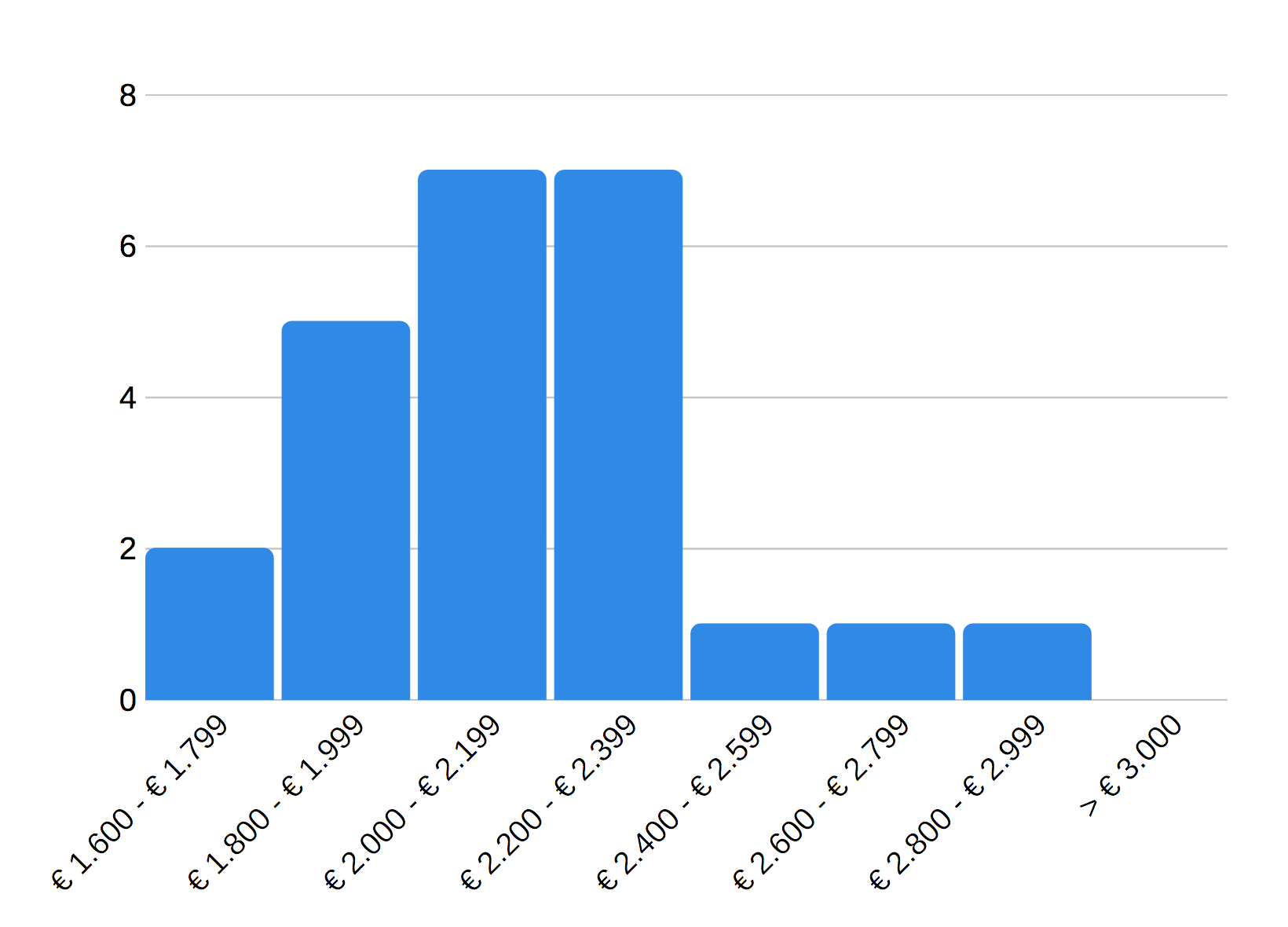 In contrast, the salaries of self-employed developers are a lot more diversified. The majority of the participants indicated to be situated between € 2.000 and € 2.200, which is fairly similar to employees though it is worth noting that freelancers/entrepreneurs usually have quite a bit more options when it comes to extra-legal advantages and financial optimizations within their company. 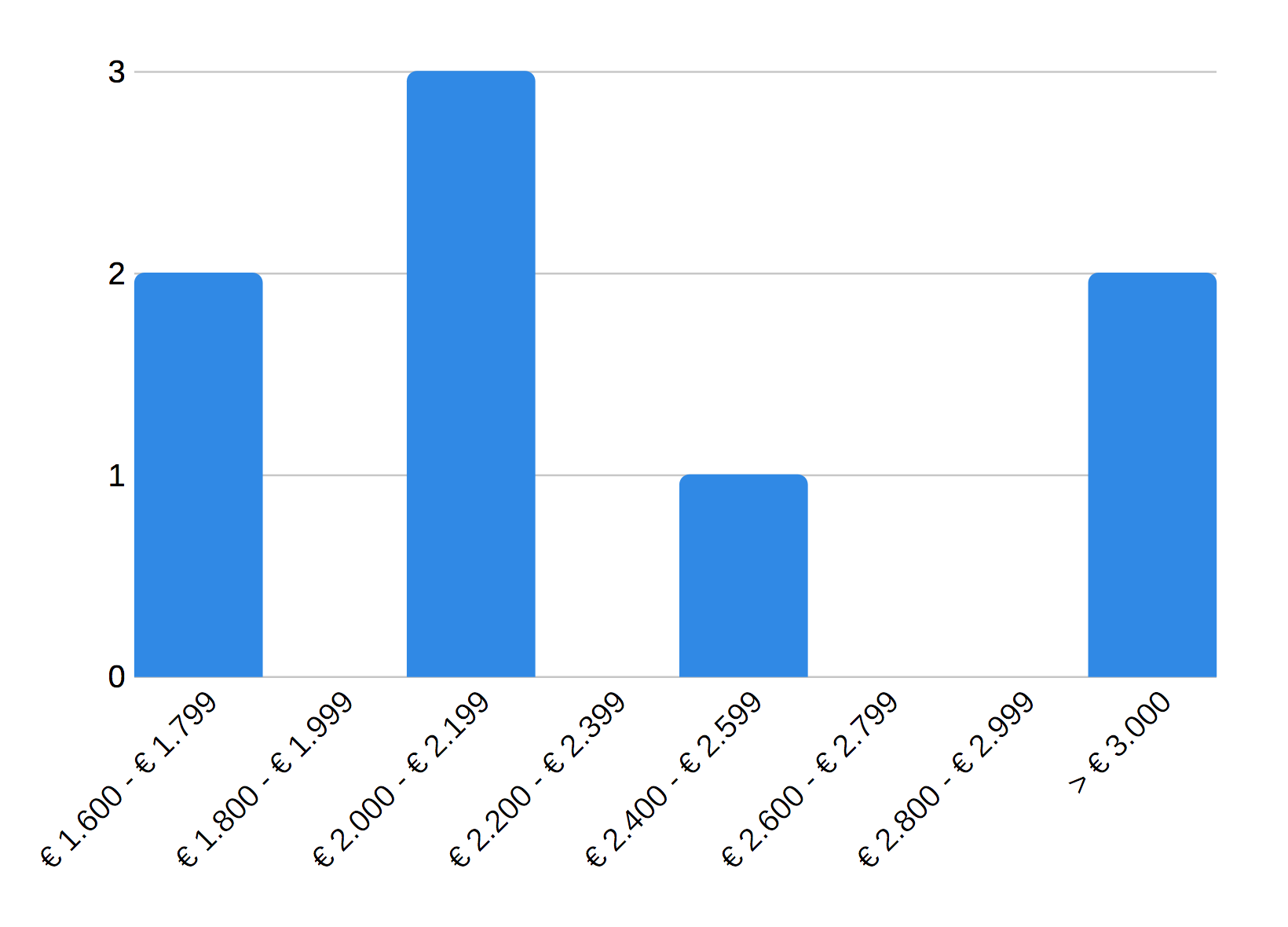 Finally, we can take a look at some of the extra-legal advantages that PHP developers enjoy because of their specific skill set. Beside the obvious perks such as a laptop, it seems that almost all developers enjoy quite a number of advantages such as a car, fuel card, cellphone (often with fee) and meal vouchers. Some others are a bit less common such as pension insurance and health insurance but all and all I thinks it’s safe to say that most of us have our regular paycheck supplemented with quite a number of useful bonuses. 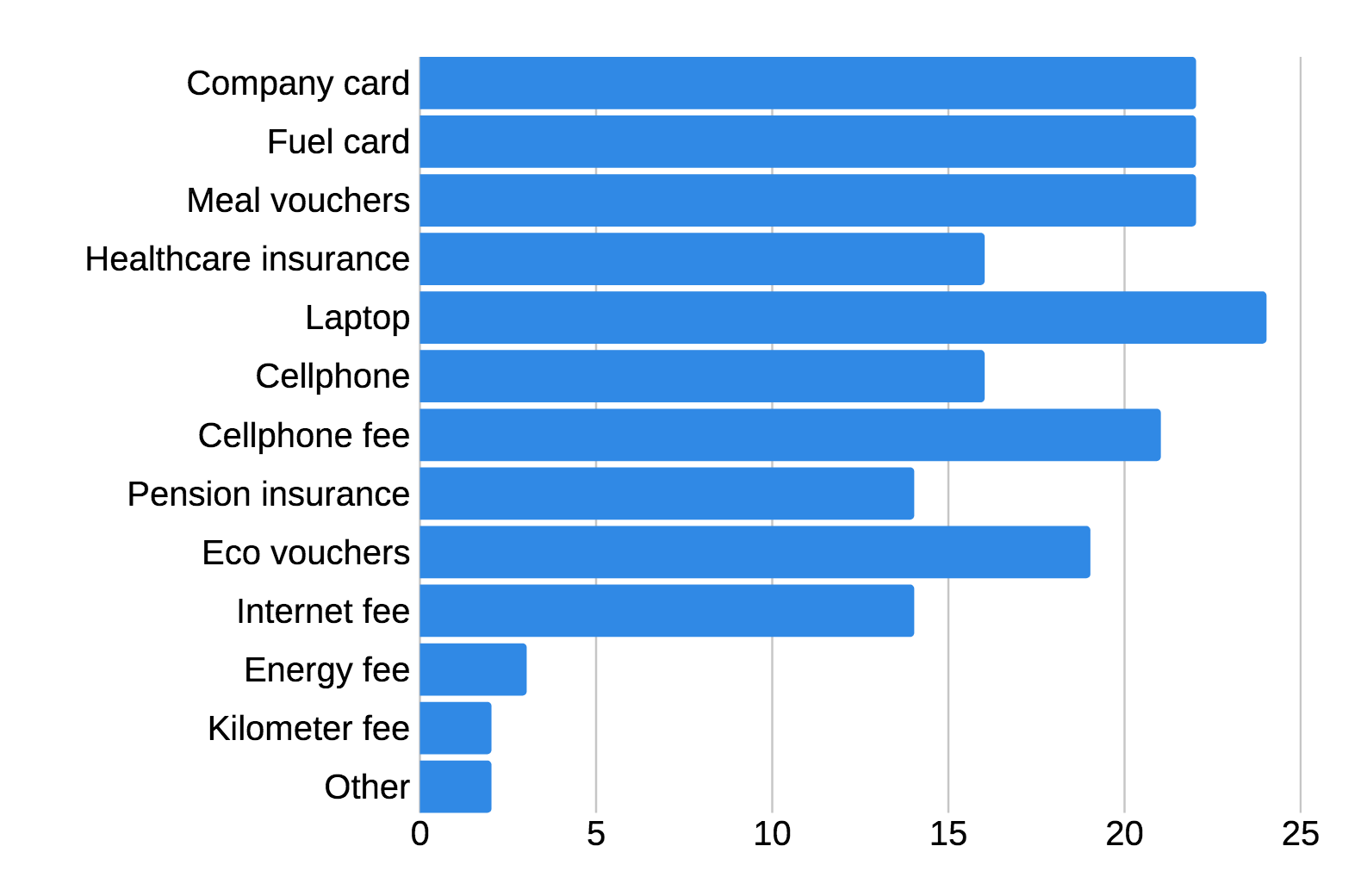 As I indicated earlier in this piece, I have no intention to over-analyse these results so I won’t go into them too much further. Instead, I will highlight some of things I found interesting and leave you to draw your own conclusions based on the results you can download here.

Trends in revenue do not exist

Contrary to what I initially believed, there are very few trends to be determined from the results when it comes to revenue. As far as I can tell, the only thing you can tell for sure, is the you will earn less than average during your first 5 years as a developer which is not at all surprising. After that, revenue varies greatly and given the limited set of questions, it’s very hard to determine why this is. To me, this is an indication that there is absolutely nothing to hold you back and that you can make a good living no matter who you are or what your background or education is. You just need to take charge of your career and make it happen.

Just about all participants indicated that the did have benefit of a company car or kilometer fee (“kilometervergoeding”). This confirms once again that Belgians love their cars above any other kind of transportation. Given recent trends with regards to climate change I am curious though if and how this is going to evolve in the near future. Speaking for myself, I have to admit I’m not likely to give up on this perk any time soon given that public transportation in Belgium is pretty crappy and it’s incredibly beneficial for me as a freelancer to have a company car.

PHP developers have an expiration date

Possibly the most shocking or revealing piece of information to me was that only 1 person out of 30 indicated to be active as a PHP developer with more than 15 years of experience under his belt. This too is a clear indication that just about all PHP developers either quit (unlikely) or transition into another role or position after a certain period of time. Most likely this involves team lead roles such as scrum master and product owner, although this is purely speculation on my part. It would be very interesting to explore this part further to learn why people got out of PHP development and what people actually change to in order to grow. 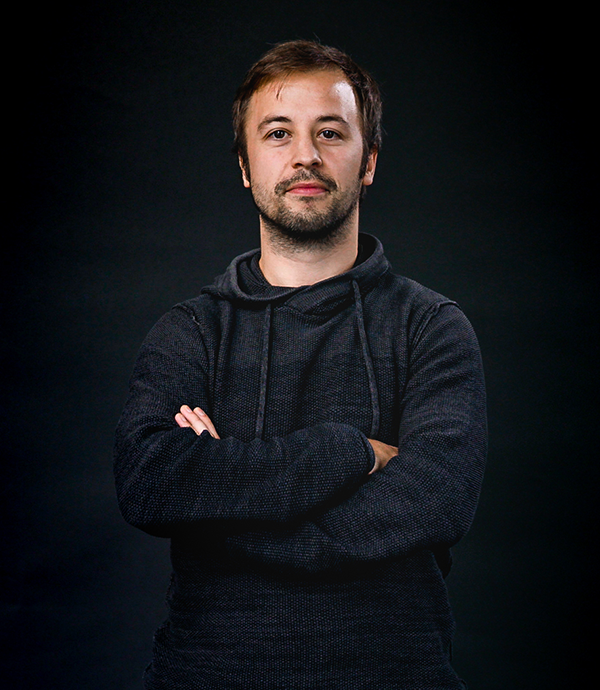